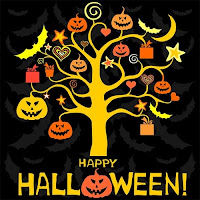 Halloween is around the corner - and parents are busy planning Halloween parties for little witches and ghosts. Do you have a fun halloween-themed craft or game? Share it here and help give another parent a great idea.
One of our favorite crafts (great for a class party) - are pasta skeletons. Materials: black paper, white crayons, different shapes of pasta, and glue. Kids draw a skeleton on the black paper, and then glue on the pasta in the skeleton shape. Each creation will be unique and fun.

My kids started asking if they could work on their Christmas lists today...a sure sign it will soon be that most magical time of the year. On the top of my wish list...a completely stress free holiday. Is it possible? I know it is. IF (a big if) I'm truly organized.
Parties, crafts, decorating, cooking, shopping, and a partridge in a pear tree. (and a day job.) The goal is to finish everything possible before Thanksgiving and then really enjoy all the fun.
Want to join along and enjoy a stress free holiday season?
For the first weekend in October, these are the goals:
1) If you are entertaining/hosting, plan the menus, including recipes and shopping lists
2) Purchase holiday outfits for the kids (yes, they are in stores now!!) Of, if you're too busy to get out - get online - find barely-used options on eBay or buy from your favorite stores online
Good luck and best wishes for a stress free holiday! Share your tips and thoughts below. (and tweet at #stressfreeholiday.)
Posted by NicoleB at 4:45 PM No comments:

It isn't news that many tweens and teens don't get enough sleep. Now, new research shows that when kids sleep matters, as well as how long.
A study of 2,200 9- to 16-year-olds in Australia found that kids who go to bed late and get up late are at greater risk for obesity, lack of exercise, and other related health problems, regardless of sleep duration.

Ben Franklin knew what he was talking about! Read more here.
Posted by NicoleB at 3:23 AM No comments: